Grow Montana focused on four food and agriculture issues during the 67th legislative session: soil health, country of origin labeling, Double SNAP Dollars, and Farm to School. The coalition worked with our lobbyist Cole Mannix to engage on the the following bills:

The Soil Health Subcommittee Bill, sponsored by Senator Pat Flowers (D-SD32), aimed to appoint a soil health task force to explore how the state can promote and support farming and ranching methods that improve the health of our soils, and the yield and profitability of our agricultural lands.

The bill was introduced in the Senate Natural Resources Committee and passed executive action (7-5). The bill moved to the Senate floor and unfortunately was not passed (23-27) and indefinitely tabled (31-19). SB180 was the first soil health bill proposed in the Montana legislature and has led to a larger statewide effort to continue supporting producers and soil health in the state.

The Country of Origin Labeling Bill House bill, sponsored by Frank Smith (D-HD31), and Senate bill, sponsored by Tom Jacobsen (D-SD11), asked retailers to put up signs in front of beef and pork that clarifies the product was born, raised and processed in the United States.

HB324 was introduced in the House Agriculture Committee and was tabled. SB210 was introduced in the Senate Agriculture Committee, but unfortunately was also tabled before it could be heard on the Senate floor. Both of the Country of Origin of Labeling bills raised the profile on these issues and built up grassroots support for more transparency in labeling and packaging in Montana.

HB235 was introduced in the Health and Human Services committee, where it passed the committee and was submitted for a second reading in the house. HB235 passed the second and third readings in the house with an updated fiscal note and then referred to the Senate Public Health, Welfare, and Safety committee. The bill was tabled in the senate committee, but in a surprise turn of events, supportive Senators worked to bring HB235 back through a move called “blasting the bill out of committee.” To do this, bipartisan votes were recruited to bring the bill back to the Senate floor. HB235 then successfully passed the second and third reading on the senate floor and was sent to the Governor’s Desk to be signed into law or vetoed. Ultimately, Governor Gianforte vetoed the bill. Though this was not the outcome Grow MT was working towards, the bipartisan support and outpouring of advocacy and testimony from citizens showed that Double SNAP Dollars is an important program that makes a difference in peoples’ lives.

The Farm to School, sponsored by Laurie Bishop (D-HD60) would have created a competitive grant program through the Office of Public Assistance that would allow schools to apply for funds that would help pay for starting or expanding current purchasing of Montana grown or processed foods. HB642 sought state appropriations in the amount of $200,000 over the biennium.

The bill was heard in the House Education Committee, where 13 witnesses testified in support of the bill, with several others sending in written testimony, but the bill was ultimately tabled in the committee. Grow Montana is committed to promoting and advocating for farm to school initiatives and will consider how the coalition can provide support in the 2023 legislative session.

Grow Montana would like to thank everyone who supported the coalition and advocated on behalf of these bills during the 2021 Montana Legislative session. We look forward to the next legislative session and continuing to build healthy food and agriculture systems in the meantime! 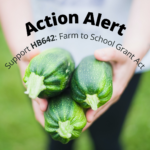 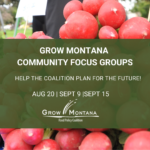